Don Kavanagh is a perfectionist and he applies that principle to every aspect of his life. His career has run the spectrum from underwater welding to a long, successful period in the dent repair business. For 31+ years Don’s Dent Kraft paintless dent removal business has been his passion. He’s gathered all of his knowledge, experience, and attention to detail, and invested it into becoming the top PDR shop in the Twin Cities metro area. 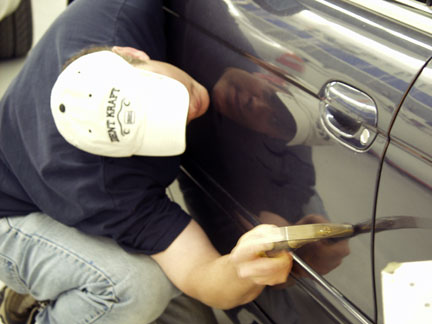 Saving the planet one dent at a time!

Everyone hates dents but many people don’t realize how bad traditional bodywork repairs are for the earth and the environment. The old body shop repair methods use body fillers and involve sanding and grinding, spraying primers and spraying paints and lots of products, chemicals and solvents. Even with their green efforts, most shops still do not use water borne paints and follow green protocols.
Paintless Dent Repair, on the other hand, is completely green. By massaging your dented panel back into position means your factory finish (and paint warranty) remains intact. No fillers, primers, paints or solvents are used in the repair process. This means you are back in your car so much sooner and the carbon footprint is nearly completely eliminated. Bringing your vehicle in to DentKraft’s State-of-the-Art repair center ensures you get the least invasive repair while having the added bonus of helping save the planet…one dent at a time!

Don Kavanagh worked as an award winning Service Advisor (Mercedes Benz and BMW) in Minneapolis for 8 years in the 1980’s. In 1987 Don met a German craftsman named Juergen Holzer. Holzer was one of the first true paintless dent removal technicians in the United States. Juergen Holzer had learned his craft at the BMW Factory in Munich, Germany where he honed his technique for ten years.
Kavanagh approached Juergen about teaching him the fine art of PDR. In 1989 Don invested $50,000 for two months of paintless dent repair instruction under Juergen Holzer. Don was Holzer’s first student so he stayed on and worked under his teacher’s watchful eye. Working and studying with his mentor for those two years allowed Don an invaluable experience.

By 1991 Don Kavanagh opened his own paintless dent removal company: Dent Kraft Plus. In 1993 a large hailstorm hit the Twin Cities. This caused major hail damage to hundreds of cars, trucks, and SUV’s and brought many PDR techs together. It also brought on a natural collaboration.
In 1991, during the hailstorm, Don collaborated with another local gentlemen who had trained with Dents Unlimited in Springfield, MO. His training varied from the technique Don had learned. The two taught each other their respective techniques. This cooperation allowed each man more versatility in the way they executed paintless dent repair.
When Kavanagh first started in PDR, Holzer put a limit on the size of dents they worked on at 2″. With the combined knowledge Kavanagh and his partner had shared, they were able to expand not only the size of car dents they could repair, but they also learned how to repair many car dents they previously had to turn away. 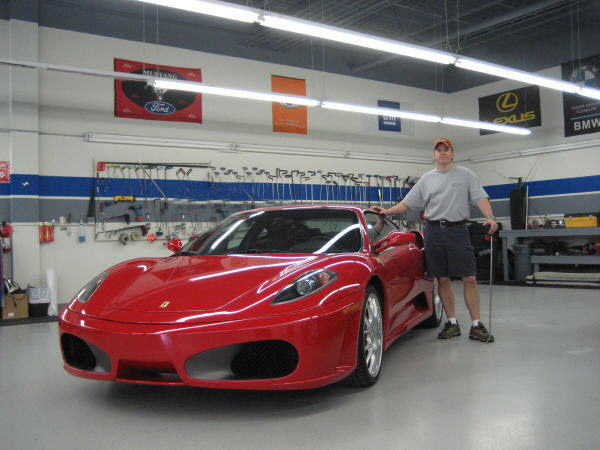 In 2003 Don Kavanagh separated from his partner and opened Dent Kraft PDR. After residing in Plymouth, MN for 8 years, Dent Kraft PDR found it’s new home in Wayzata and opened their doors on July 1st, 2011. With over 55 years of combined experience, and a rich history grounded in German artistry, Don Kavanagh’s Dent Kraft PDR is known in the Twin Cities as the premier pioneer in paintless dent removal. Their focus is only on absolute client satisfaction. Contact Dent Kraft PDR today by phone, email, or just stop in and see us! 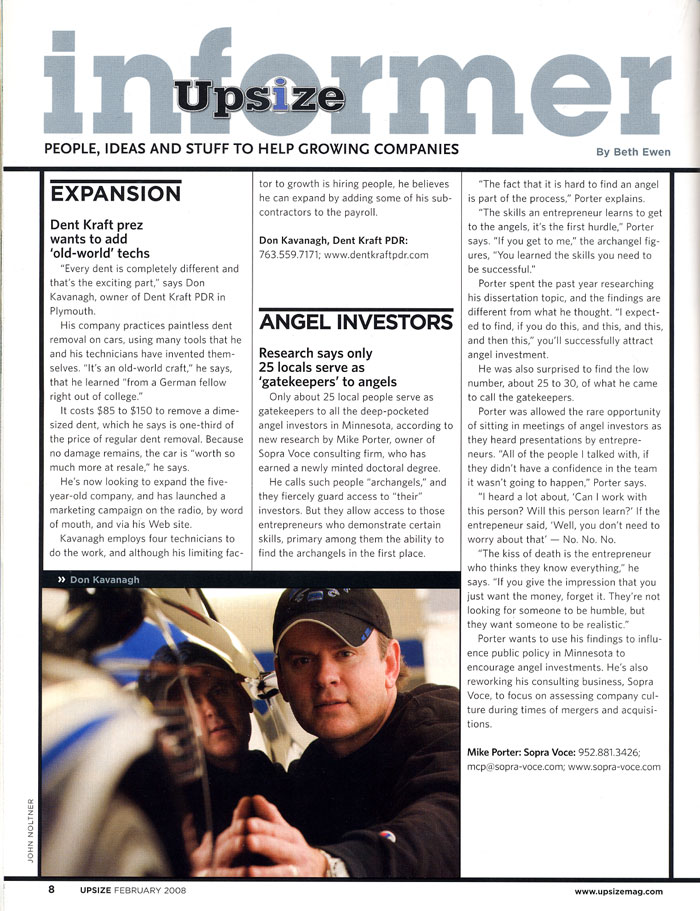 Don Kavanagh and Dent Kraft PDR appeared in the February 2008 edition of Upsize Minnesota, a local Minnesota small business publication . Dent Kraft PDR of Plymouth, MN makes dents disappear on virtually every car or truck model. Many times, dent repair takes less time than an oil change. Call Dent Kraft PDR today at (952)-473-8000 to make an appointment with the “best of the best in PDR repair in Minnesota.” 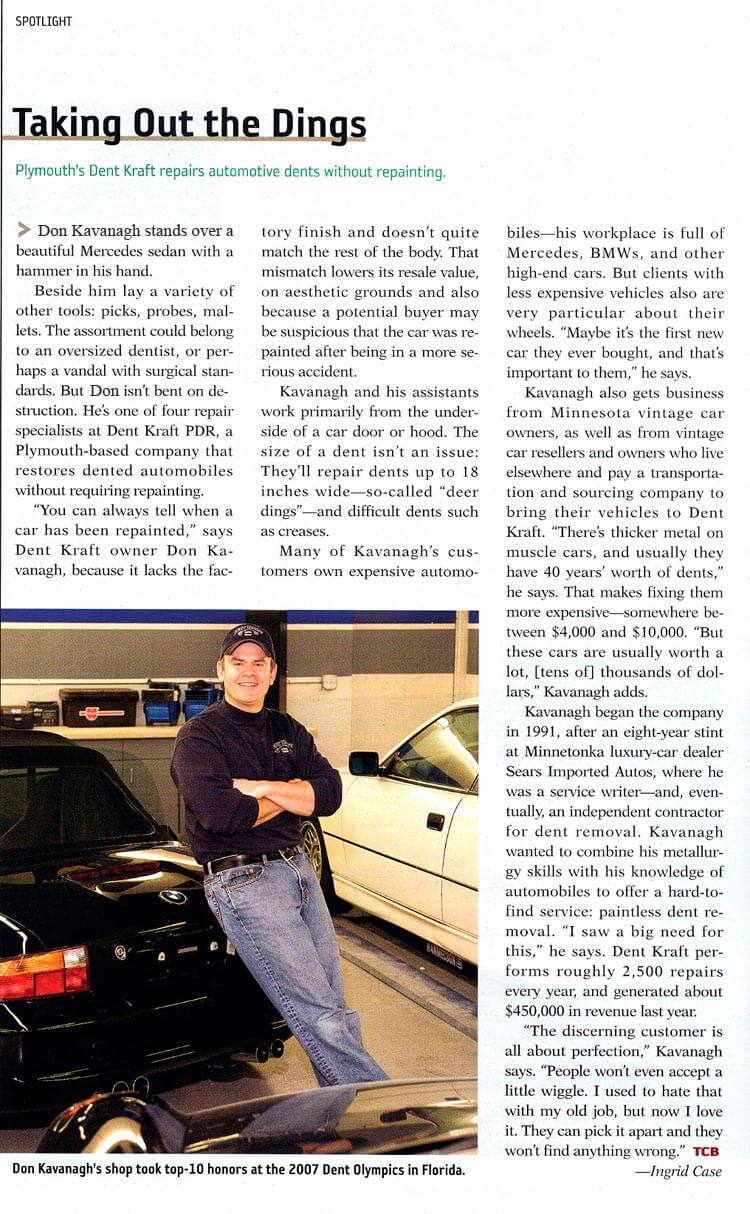 Twin Cities Business magazine writes about Don Kavanagh and Dent Kraft PDR. Dent Kraft PDR of Plymouth, MN makes dents disappear on virtually every car or truck model. Many times, dent repair takes less time than an oil change. Call Dent Kraft PDR today at (952)-473-8000 to make an appointment with the “best of the best in PDR repair in Minnesota.” 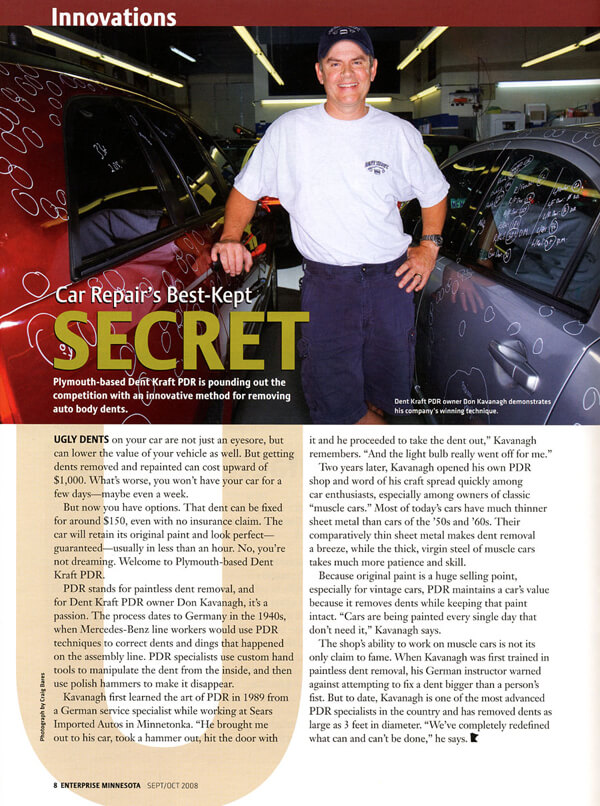 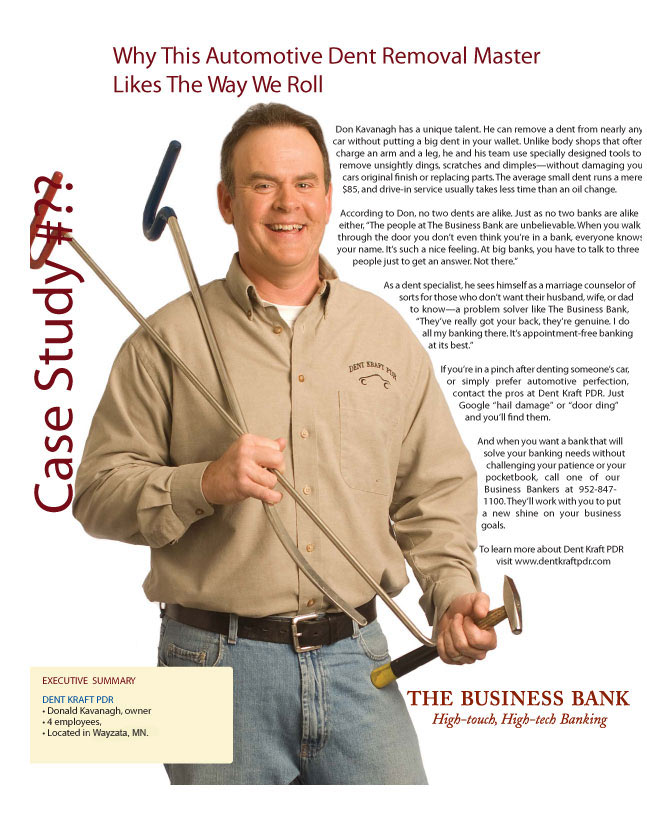 Don Kavanagh and Dent Kraft PDR bank at the “Business Bank”. Dent Kraft PDR of Plymouth, MN makes dents disappear on virtually every car or truck model. Many times, dent repair takes less time than an oil change. Call Dent Kraft PDR today at (952)-473-8000 to make an appointment with the “best of the best in PDR repair in Minnesota.”