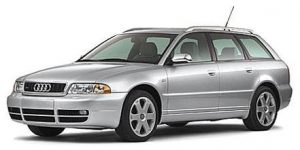 Audi S4 Avant Dent Repair – This was a large dent that caved in a portion of the tailgate panel. The impact caused the metal to buckle outwards as well as dent inwards. Dent Kraft‘s Audi S4 dent repair was performed using paintless dent removal techniques. If this damage was brought to a body shop, they would have either used filler or replaced the panel and repainted the tailgate. This would have required blending into the quarter panels to color match the factory silver paint job.

When using the art of metal manipulation, we are able to “massage” the metal back to it’s original condition without damaging the vehicle or harming the paint. This technique preserves the factory finish of the car. It is important to preserve this initial paint as it is more durable than any secondary paint job and you don’t have to worry about matching the paint color that is being resprayed. The process of Paintless Dent Removal also saves the individual time and money. This was repaired at a fraction of the cost that a body shop would charge to repair and paint the panel.

Dent Kraft PDR, located in Minnetonka, MN is also green. We do not use any chemicals in the Paintless Dent Removal process.