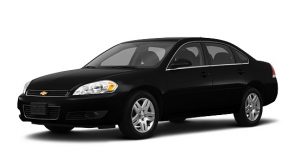 Chevrolet Impala Dent Repair – Another very common dent caused by a minor car collision which only affected the bumper cover. Although there is minor damage to the paint (scratches, scuffs, etc.), we can remove the impact dent and still save you a trip to the body shop to have your bumper painted. You may see minor scratches or faint cracks in the paint. Because the cover is plastic, there is no need to worry about rust forming and making the affected area look worse. With the techniques of Paintless Dent Removal and some added heat, we can work out the damage.

Dent Kraft is located in Minnetonka, MN. We apply our skills that we have acquired through paintless dent removal. By doing so, we are able to “massage” the bumper covers back to their original shape and form without damaging the car and without stretching the plastic. This technique performed during the Chevrolet Impala dent repair preserves the bumper and the owner does not have to buy a brand new bumper cover . This process of repair using our specialized dent removal techniques prove to save the individual time and money. This was repaired at a fraction of the cost that a body shop would charge to repair or likely replace the part.