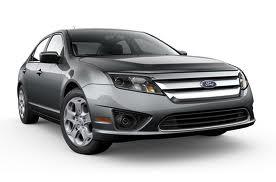 Ford Fusion Dent Repair – This is another example of a typical dent we are capable of repairing. This individual brought their Ford Fusion in for dent repair after he had backed into his garbage canister at the end of his driveway. The paint was not damaged but the body line on the quarter panel had a significant dent. This can be more difficult than an average dent because we have to reshape the body line which holds tension within the panel. We repaired this dent in a few hours and the customer was very pleased with the repair. He also enjoyed saving money in comparison to a conventional repair found at a body shop.

Dent Kraft, which is located in Minnetonka, MN, employs expert craftsmen who specialize in the fine art of paintless dent repair. We can remove a wide variety of dents, door dings, creases and even large panel dents. We work on all makes and models that have metal panels, and we are also able to repair dents in plastic bumper covers, often caused by minor fender benders, snow banks or curbs.

Using precision Paintess Dent Removal techniques, we are able to restore your vehicles damaged panels back to a factory finish condition without the need to spend hundreds, if not thousands of dollars on conventional repair and a new paint job. We slowly “massage” the metal back to it’s original shape, all while preserving the original, factory paint job as performed on this Ford Fusion dent repair. This original paint is very important because it is more durable than any follow up paint that would be applied at a body shop. This process not only saves you money but also removes the hassle of trying to color match a newly sprayed panel to the original color. We also tend to be a quicker repair over a conventional body shop.

We work with all major insurance companies for larger dents or hail damage repair when it makes sense to file a claim. For smaller dents, we can save you money in the long run because the cost to repair a small dent using Paintless Dent Repair is likely under your insurance deductible. This Ford Fusion dent repair is a perfect example. In this case, a claim is not needed and the incident stays off your record, keeping your premiums down. A dent that is repaired at a body shop via conventional bodywork with a paint job will likely be over your insurance deductible. In many circumstances, an insurance claim will be filed, possibly raising your rates.

Dent Kraft PDR has been removing dents since 1991 and has over 30 years combined experience. We are also a green company as we do not use any chemicals in the Paintless Dent Removal process.