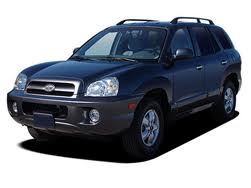 Hyundai Santa Fe Dent Repair – This repair was not what we would consider an “average” dent. As you can see from the picture below, this type of repair can be done but it is much more time consuming and very difficult to return the panel back to its original shape. After several hours, we were able to restore the shape of this fender for this Hyundai Santa Fe dent repair. Fortunately, there was only minor paint damage that we were able to buff out after the dent was removed. The owner was amazed we were able to remove such a large dent and was very happy to have saved so much money using paintless dent removal as compared to conventional body work.

Dent Kraft technicians utilize special tools and techniques to complete the paintless dent removal process. Using these techniques, we are able to “massage” the metal back to its original shape without causing harm to the paint. It is important to preserve the factory paint finish as it is more durable than any secondary paint job that would be performed at a body shop. The fact that you don’t have to paint a specific panel on your vehicle also prevents the problem of color matching the new paint to your car’s factory finish. Paintless Dent Removal can also save you hundreds of dollars as compared to a conventional repair found at a body shop.