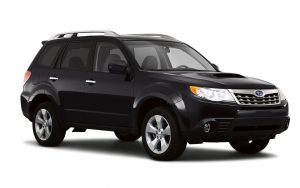 Subaru Forester Dent Repair – This vehicle was delivered to Dent Kraft from a detail shop. There was an accident at the detail shop and this dent was the result. It was an emergency because the car was to be delivered at the end of the day. It was more difficult than an average dent as it went through two body lines of the driver’s door. We were able to repair this dent using the fine art of dent removal, also known as PDR. The detail shop was happy as the dent was completely gone and did not have to disappoint the owner with bad news that their car had been damaged.

We used the application of paintless dent removal during this Subaru Forester dent repair which allowed us to manipulate the metal panel that had been damaged. We “massaged” the panel back to it’s original  shape and condition. Paintless dent removal uses very precise pokes to slowly raise the dented metal without damaging or cracking the paint. Using this process during the Subaru Forester dent repair preserves the original, factory finish of the car which is very important as the original paint is more durable than any follow up paint job. You also eliminate color matching the paint that is being resprayed which can be difficult with certain colors. Repainting a panel also leaves evidence and signs that a paint job has been performed which may raise questions in the future for any potential resale. The process of Paintless Dent Removal can also save the individual time as well as money. This was repaired at a fraction of the cost that a body shop would charge to repair and paint the panel and also in a fraction of the time. 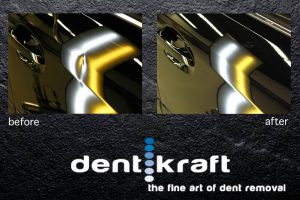 Paintless Dent Removal not only saves you money for the repair cost, but can save you money on your insurance costs as well. A dent that is repaired at a body shop via conventional bodywork with a paint job will likely be over your insurance deductible. In many circumstances, an insurance claim will be filed, which can possibly raise your rates in the future. That same dent can be repaired using Paintless Dent Removal at a price below your insurance deductible. Therefore, you pay less to have the dent repaired and a claim does not need to be filed, saving you money in the long run.